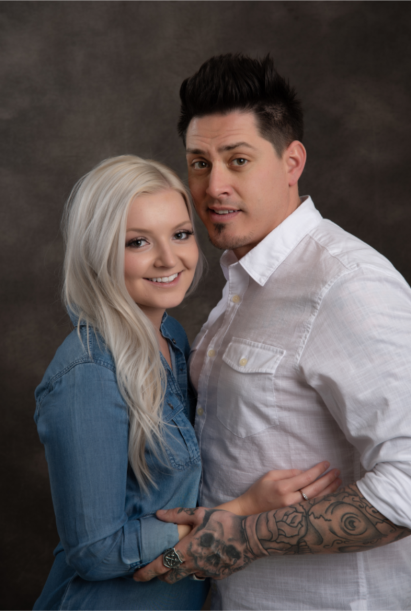 Justin grew up in Cheboygan, MI. After graduating he studied culinary arts downstate but had a bigger passion and interest in drawing and illustration. He moved to the Upper Peninsula in 2006 and started an apprenticeship shortly after being tattooed and falling in love with the artistry of it. New Age was the first place he was tattooed, and the Upper Peninsula is where he eventually obtained a booth as an artist. He went on to buy and now owns and runs his studio along with a group of amazing artists.

Paige grew up in Southgate, MI and moved to Marquette in 2010 where she attended NMU for nursing and military science. She also graduated from Bay Community College as a first responder and earned an associate degree in arts. Paige currently works at U.P. Health Systems in Neurosurgery and manages several side businesses.

Justin and Paige met at New Age in 2011. What started as a piercing, led to an inseparable relationship. The couple got married in June of 2016 and have three children: Aubrey, Kruiz, and Khai, as well as three dogs: Trigger, Harper and Wilma. The Gahn’s love being outside, traveling the world, skiing/snowboarding, and trying new wines and cheese together. They are both very excited for this amazing opportunity to benefit U.P. Hospice Foundation.